The future of Airconditioning...!

Let's face it, airconditioning systems are not the most environmentally friendly thing on earth. But we can't live without it...

So some nice R&D peeps have decided that they will do something nice for Earth - by using other means to provide cool air. And this is with magnets!

In this system, HCFCs will not be required as alloys will be used as the 'refrigerant' and water will be used for heat transfer. Electricity will still be required but it will be much more efficient than the compressor we are using today.

The not so good news is, this will take years to develop for residential use... 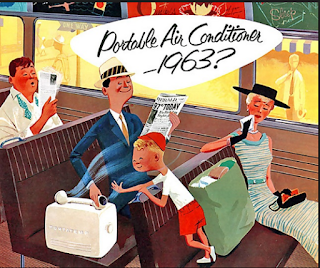 Posted by Unknown at 9:50 PM No comments:

Since the smoky mysterious haze will be all we are talking about for the next few weeks (hopefully not months) let’s find out more about it
What is the HAZE we talk about every year?

From Wikipedia
“The Southeast Asian Haze is a fire-related large-scale air pollution problem that occurs regularly. These haze events have caused adverse health and economic impact on Brunei Darussalam, Indonesia, Malaysia, Singapore, and to a lesser degree, the Philippines and Thailand. The problem flares up every dry season, in varying degrees. Transboundary haze in Southeast Asia has been recorded since 1972.
The haze is largely caused by illegal agricultural fires due to industrial-scale slash-and-burn practices in Indonesia, especially from the provinces of South Sumatra and Riau in Indonesia’s Sumatra island, and Kalimantan on Indonesian Borneo. Burned land can be sold at a higher price illegally, and eventually used for activities including oil palm and pulpwood production. Burning is also cheaper and faster compared to cutting and clearing using excavators or other machines.

The health effects of haze are mainly caused by the irritant effects of fine dust particles on the nose, throat, airways, skin and eyes. The health effects of haze will depend on its severity as measured by the Pollutants Standards Index (PSI). There is also individual variation regarding the ability to tolerate air pollution. Most people would at most experience sneezing, running nose, eye irritation, dry throat and dry cough from the pollutants. They are mild and pose no danger to the health of the general population.
However, persons with medical problems like asthma, chronic lung disease, chronic sinusitis and allergic skin conditions are likely to be more affected by the haze and they may experience more severe symptoms. Children and the elderly in general are more likely to be affected. For some, symptoms may worsen with physical activities.“

What can we do about it?
Wikipedia mentioned the health impacts of haze on people. Not to mention the impact on environment, the animals that live in the forests (orang utans for example) and the humans living within the burnings who suffered the direct devastating damage. SEA countries affected by the haze yearly have been putting pressure on Indonesia to work on a solution, including Singapore and Malaysia. The economical, social, environmental and medical  impact of the haze on these countries and their people have been enormous.

What about the general public?
There are public lobbying of not supporting food that use Palm oil (one of the biggest production that come out of these illegal lan.-burning activities), or buy from manufacturers who use only sustainable palm oil Check the ingredients on the product before you check them out at the supermarket. You will be surprised how many things contain Palm oil – from oil to chips to soap…!!
You can spread the word, inform the others (like Aunties and Uncles who may not be so updated) of the ongoings and what they can do to not support the burning and to protect themselves.
Remember we are smart and informed consumers!

Cheers!
Aircon.guru
Posted by Unknown at 6:45 PM No comments:

TOP 5 PROBLEMS OF AN AIRCONDITIONING SYSTEM

Airconditioning system is an electrical appliance that is becoming a necessity in Singapore, rather than a luxury. So, it will be good to be aware, what are the most common problems of an AC system.
– leaking problem– AC not cold– Noisy AC– Smelly AC– Low on Refrigerant
Many a times all problems have a simple root cause – you don’t take care or maintain your AC frequently! If the problem has not manifest to a big one over a long time, usually a good clean such as a chemical overhaul will do the job.
It would be wise not to wait too long to do a cleaning. The simple rule of thumb for electronics problem solving – The longer you wait, the more it will cost you…
Cheers!
Aircon.guru
Posted by Unknown at 6:40 PM 7 comments:

Here are the ‘symptoms’ that your AC is low on refrigerant1) The room is taking a long time to get cold. This happens because the refrigerant is a critical component that regulate the temperature of the room by removing the heat from the hot air. So without sufficient amount of this liquid, your room will take a long time to cool down.2) Hot air is released from the AC unit. Reason being the refrigerant is insufficient to cool the air down!3) $$$ at the end of the month – The AC will operate longer to make the room colder. Longer the AC is on, the more electricity is used, and so you pay more4) Bubbling or hissing sound – there is a significant leak going on, and the refrigerant is escaping from the hole.How do you resolve this issue then?The most probable cause why the refrigerant was low in the first place is because there is a leak. The other reason why the refrigerant was low could be the amount was not enough when it was installed. The technician needs to find out the location of the leaking to solve the problem once and for all.
– The leak is in the valve or port, such parts will then need to be replaced– The leak is in the refrigerant line copper tubing, then soldering of the part will be necessary.– The leak is in the condensing coil or in the evaporator coil, soldering is a possible repair option but this is more tricky.. some conditions may render repair not likely such as the part is too old and rusty etc
These repairs require a well-trained AC technician to perform and the cost may not be cheap. Usually topping up the gas to make the AC operate again is the solution provided. If you are like to resolve to the end, give us a call and we can provide the right technician to advice accordingly.
As usual, we hope this will not happen to your AC!
–
Cheers!
Aircon.guru
Posted by Unknown at 6:39 PM 2 comments:

Hello all!One of the issues our clients have faced and alsoI have faced personally (refrigerator, not aircon. Same same but different as some would say!) is on circuit board (aka motherboard) problems. What would have been the cause of it?– Too old, the circuit board is fragile– When there is a current surge and the circuit board cannot take the surge– Wrong voltage input– Wrong wiring/ wires that are damaged or spoilt– Pests inside the aircon units that interfere with the circuit board
Repairing is not a common method as it takes skilled technicians to do that. Usually replacing the whole circuit board is a more common solution by most AC servicers. Replacement of this part can cost a few hundred SG dollars.
There are many reasons why the circuit board will be faulty. Again, a trained technician can diagnose the issue. As for the fixing, there is no way to escape the cost (unless the technician can promise to repair the circuit board. Repairing will definitely be cheaper)
Hope this doesn’t happen to your AC unit though!
Cheers!
Aircon.guru
Posted by Unknown at 6:38 PM 1 comment:

I would like to think the compressor is like the heart of the airconditioning system. It circulates the hot and cold air to keep the room cold.
So when it is spoiled.. what do you do?
It is not cheap to do a 'heart' operation - it can easily cost SGD1000 or more, depending on the brand, model and system of your AC.
So how do you decide?
First you got to be sure it is a compressor system. The findings of the technician is likened to a doctor's diagnosis - you may want to seek a 2nd (or even 3rd!) opinion or asked for a well qualified technician to confirm the evaluation. So to be sure that the compressor is the problem and not something else. You won't be too happy to know that you have spent thousands for a wrong diagnosis.
So once you have confirmed it is the compressor issue, is it still under warranty? Usually compressor are under warranty for a few good years. Check your receipt / guarantee card.
And sometimes, you can change only the compressor, though you may want to consider changing the full outdoor unit (ie the condenser unit). You would want to have the expert's advice. And what about the cost of changing just the compressor vs the whole outdoor unit?
Then with all the cost in, you may also want to consider changing the wall mounted units as well - this will be a full AC replacement. First the cost might not differ than much between just changing the outdoor unit vs changing the full AC system. 2ndly the compressor may not operate at a optimized level with a different AC unit it was created for. This will affect the efficiency and the performance of the whole AC as a system.
So all in all, you may want to compare the costs after getting a full diagnosis from a well qualified technician. This is not an easy decision to make, but with the steps above, hopefully we have been of help!

A friend told me this trick that she read online which will help to keep the room cold without lowering the temperature.
The tip is to use the ‘DRY’ functionality in your airconditioning system!
One of the options on your remote under ‘Mode’ is the DRY function, as shown in the picture of the Panasonic aircon at my own place. By making the room dry, the airconditioner is actually set to remove the moisture through dehumidification. This process also lowers the temperature of the room, without having to set it at 16DegC.
This is similar to the basic principle that was applied in Carrier’s invention of the first commercial airconditioning system
By keeping the set temperature at a reasonable 25DegC and in the DRY function, this apparently will enable the airconditioner to run more efficiently without using more energy.


I personally haven’t tried yet.. but I do not like the dry feeling, it makes me thirsty as the air will be dry and my throat will start itching! It is up to individual so why don’t you give it a try, and it may work for you!

Cheers!
Aircon.guru
Posted by Unknown at 6:30 PM No comments: